Every night, brewers in and around the northern Vietnamese city of Hanoi produce gallons of light, frothy beer. Kegs are loaded onto motorbikes and vans each morning and carted into the city’s Old Quarter to the bia hois.

This daily ritual is an iconic Hanoi tradition, popular with tourists and locals alike. Sitting out on the tiny stools of the neighbourhood bia hoi is the Vietnamese equivalent of going to the pub, where people from all walks of life take out the day’s frustrations over a glass of the good stuff. Anyone who’s sat out on Chôm Chôm’s iconic stoop, in SoHo, will be familiar with the boisterous yet good-natured atmosphere of these streetside bars.

A contender for the world’s cheapest beer, at 5000-20,000 VND a glass (HK$1-10), bia hoi is to be consumed quickly before it loses its natural fizz. But don’t worry, a refill is at hand, usually tapped from a keg balanced on a plastic beer crate. It’s best to get your seat early as the bia hoi stands will order what they need for the evening, but once it’s gone, it’s gone! 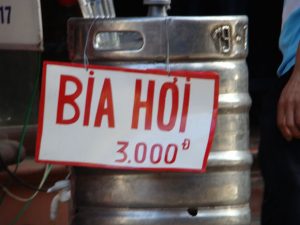 Bia hois are often conveniently located right next to street food stalls serving favourites like grilled pork skewers, fried nuts and chicken wings, with any bones going straight on the floor. Sharing plates of frog’s legs, chicken feet and deep-fried snacks are common – anything salty and satisfying to accompany a beer.

The Vietnamese weren’t always beer drinkers. The first breweries were set up to serve French colonialists, no doubt missing their 25cl bottles of Kronenbourg. At that time, beer was a very expensive, elitist drink.

Things changed during the first Indochina war with the French in 1945, when materials like metal and glass became precious commodities used in the war effort. No longer able to make beer bottles, cans or storage tanks, breweries created a lighter style of beer that could go straight into a reusable keg. Bia hoi glasses are made from recycled glass for the same reason. Each tumbler is slightly different and there are often impurities in the glass, but they are good enough to contain a cold one in the seconds it takes to go from tap to mouth.

As fighting intensified, the government rationed rice, which meant the country’s lifeline crop could no longer be used to make rice wine, a staple of the working classes. During this time, leader Ho Chi Minh likened making rice wine to “drinking the blood of your brothers”, as it meant taking essential food from your neighbour’s bowl. Looking for a new way to forget their troubles, the people turned to the cheap, fresh beer served straight from the keg and bia hoi culture was born.

After the fighting ceased and the country began to rebuild and modernise, bia hoi remained a unique cultural phenomenon. The tradition has evolved into a selling point for the growing tourism trade as well as a stop-off in the everyday lives of the Vietnamese.

A bia hoi stand is all about hospitality. Despite emerging from years of brutal conflict with virtually nothing, ordinary people had the entrepreneurial spirit to summon these streetside bars out of whatever they could, serving up the cheapest beer in the world. Bia hoi is indicative of the tireless spirit and grit of the Vietnamese, who, no matter what life throws at them, come out the other end smiling, usually with a cold, frosty one in hand.

For more Vietnamese culture, read our recipe for fresh and vibrant summer rolls, or for some Vietnamese craft beer, get to know Saigon’s Pasteur Street Brewing Co.