Mid-Autumn Festival is one of the four major holidays in Chinese culture, and with its impending arrival, every major bakery, restaurant chain and food brand in the city takes advantage by pushing out mooncake gift sets. But as Hongkongers flock to stock up, have you ever wondered: ‘how did mooncakes become so popular?’

Mooncakes are believed to have evolved from pastries served exclusively to the emperor. These treats, usually with flakey or doughy exteriors and a sweet bean-paste filling, were made trendy by the nobility and became widely popular. The association of these pastries and cakes with Mid-Autumn Festival (or Moon Festival) probably comes from the emperor’s habit of sitting out in the imperial gardens with his companions for a spot of moon-gazing, a favourite pastime at the palace.

In Chinese legend, Moon Festival carries a tragic story of the beautiful moon goddess Chang-o, who mistakenly consumes a forbidden immortality elixir that confines her to residence on the moon. Only during Mid-Autumn Festival each year can she be reunited with her true love. As a choice festive food, mooncakes were adapted to include whole egg yolks to symbolise the perfectly round moon of the season, signifying family unity and being with loved ones.

Another well-known legend that adds to the mystique of mooncakes details a rebellion of the ancient Han people, who were under oppressive Mongolian rule at the time. Sick of being discriminated against and abused, the Han people were ready for an uprising. However, they had no way of organising themselves as the ruling powers made sure to isolate them and restricted their use of dangerous tools, knives and other weapons. The heroes who were to lead them, Zhu Yuanzhang (the next emperor) and poet Liu Bowen, devised a plan to imprint a call-to-arms message on that year’s mooncake designs, to rebel at midnight on the festival date. As the Mongolians could not read the Chinese characters written on the cakes, they were not aware of the plan, which led to their demise.

With such a long history in Chinese culture, it is no surprise that mooncakes are widespread throughout the country. Four major styles of mooncakes exist that each speak to their region.

These mooncakes from the north are best compared to a Shaobing, stuffed with sweet filling, wrapped with a thin pastry and baked till slightly crispy.

The people of Suzhou and Shanghai enjoy mooncakes that are very light and flakey, with an array of sweet bean-paste and candied flower puree fillings.

Also sharing the tradition of eating mooncakes during Mid-Autumn Festival, Taiwan has their own distinct style called Moonlight Cakes. These festive street snacks are made of yellow yam and are cooked on the griddle, for a chewy texture. 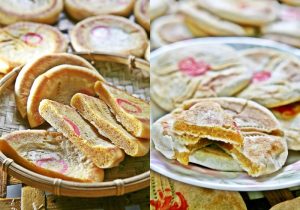 Finally, perhaps the most iconic style of mooncakes, is the elaborately decorated Guangdong style. The intricate designs, usually created with a carefully carved wooden mould, originate from the aforementioned rebellion legend. The pastry of Guangdong-style mooncakes is famous for being thin, soft and cakey compared to other styles. The distinctive egg yolks that mooncakes are known for are also most often found in Guangdong-style mooncakes. These pastries also do not crumble easily and have a larger amount of filling, making them more luxurious to eat.

The New Guard
In modern China, mooncakes have become the standard gift to show appreciation both to one’s family and friends, as well as important business contacts. Although this means big sales for the businesses marketing these delicacies, Hong Kong households generally receive more mooncakes than they consume every year, with over one million going to landfill at the end of the season. This can be attributed to the younger, more health-conscious generation slowly moving away from traditional mooncakes, which are seen as high in fat and sugar content.

In reaction to this trend, bakeries and restaurants have evolved many new styles of mooncakes to satisfy a demand for more variety and innovation. Ice skin mooncakes with a mochi-like, unbaked dough are increasingly popular, as are Western pastries like chocolate or mousse cakes disguised in a mooncake shape. Fresh fruit and less sweet filling options are also becoming more readily available. Although the recipes change through different regions and eras, Chinese families continue to gather to celebrate togetherness with family and friends every year. Whatever style of mooncake you opt for, mooncakes are best enjoyed in the moonlight, with a hot cup of tea and with those you love.