Winter is finally coming to Hong Kong, and recent gloomy skies, along with the slight drop of the mercury, are conducive to staying in and settling down for a movie marathon. Catch our rundown of the top five modern must-watches to get you In the Mood for Hong Kong.

A heartbreaking love story set in Hong Kong in the early sixties, the cult favourite tells the story of unrequited love between Chow (Tony Leung) and Su (Maggie Cheung). That it is cited as inspiration for Tom Ford’s A Single Man and the recent Academy Award winning Moonlight gives you an idea of the level of cinematography.

Oozing glamour, classic style and charm, ITMFL features beautiful costumes (21 tailored cheongsam dresses, to be precise), perfectly framed art deco sets and stellar acting from the two leads who have limited scripts but convey all of the feels.

Watch intently in a dark room with no distractions, you don’t want to miss a second of this. 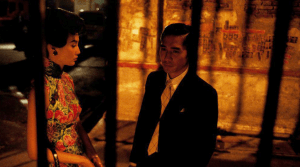 A ridiculous, over-the-top martial arts/gangster comedy with plenty of slapstick and cartoonish humour. The film garnered a fan following for featuring a number of retired actors made famous by 1970s Hong Kong action cinema and for their role in bringing the art to the mainstream.

When a petty thief (played by Stephen Chow) tries to scam the residents of a housing estate into thinking he’s a member of the Axe Gang, the real gangsters descend to restore their reputation.

Watch on a Sunday when you’re hungover with friends, devouring your favourite pizza. This is a crime thriller that has it all. Triads, undercover cops, blink-and-you’ll-miss-it pace and the most complex but satisfying twists and turns. Starring Tony Leung and Andy Lau, Infernal Affairs  tells the story of a police officer who goes undercover to infiltrate a triad whilst a police officer is secretly working for the same gang. Just try and get your head around that.

Martin Scorsese loved the plot so much that he remade it for Hollywood as The Departed.

Watch on a Friday night with a huge bowl of popcorn and get ready to yell at the TV.

An ensemble cast thriller that is as good, if not better than, it’s prequel Election. Some have argued it to be the greatest Hong Kong gangster film ever made (or at least a close second to Infernal Affairs). It includes, as you can imagine, wanton, sadistic violence, but a political plot of power struggle and China’s increasing control of Hong Kong redeem it by adding depth.

Watch after you’ve watched Election 1. Though probably not on the same day.

Side note: Sun Yee On, ‘the most important of the Hong Kong triads’, has ‘invested heavily in the Hong Kong film industry, and not coincidentally, one of the staples of the Hong Kong studios has been films romanticizing gangsterism.’ (Organized Crime, From Trafficking to Terrorism, Vol.1, ed. by Frank G. Shanty (Oxford: ABC-CLIO, 2008), p. 465) A speculative dystopian film split into five short stories and set in 2025, Ten Years offers a glimpse into what life could be like with increasing governance from the mainland. Produced on a shoestring budget, the film was a surprising hit upon release, likely due to its theme and the harsh censorship it received in the media that made it all the more intriguing.

Watch when you want to swot up on the political climate, but maybe follow up with Kung Fu Hustle to lighten the mood.