On the fifth day of the fifth month of the lunar calendar, Hong Kong’s beaches and bays are swamped in a sea of vibrant colour as teams of keen paddlers vy for glory in the annual Dragon Boat Festival. Teams from all walks of HK life race long wooden boats that are extravagantly painted with brightly coloured dragons, their strokes kept in sync by a drummer at the front of the boat. It’s the culmination of months of hard training for those taking part, and a jolly good piss up on the beach for spectators.

In all this excitement, the origins of the festival have got a bit hazy for some. In addition to dragon boating, families and communities also gather to eat zongzi and the story behind these iconic leafy-green sticky rice dumplings shouldn’t be forgotten, given that it involves death, a rice eating river dragon and the haunting spirit of an ancient poet. Here goes… Zongzi dumplings can be purchased from restaurants and shops, or made at home.

The popular legend behind the Dragon Boat Festival stars patriotic poet, Qu Yuan, who lived in the State of Chu during the Warring States Period – when people just weren’t getting along. As a scholar and advisor to the king, Qu Yan tried to warn against potential invasion from the aggressive neighbouring State of Qin, but was ignored. When the Qin finally invaded and took the capital, Qu Yuan wrote of his despair in the Lament of Ying before drowning himself in the Miluo river.

Beloved by the people of Chu for his loyalty, Qu Yuan’s death was grieved by the whole state, the local people saddened that his body was never recovered so it couldn’t be put in the ground with honour, as per Chinese burial culture. They paddled out in boats, making loud noises with drums to scare away the fishes, and threw clumps of rice into the river to keep them from feasting on his body.

The rice was also meant as an offering to Qu Yuan’s spirit. Legend has it that he appeared in his friends’ dreams to tell them of his tragic death, and asked them to wrap the rice in three cornered silk packets to ward off a dragon who had been eating all of the rice, leaving him hungry. The locals painted dragon details on their boats to scare away the mythical beast and he tradition of making triangular rice packets was born. It was passed on for generations, eventually evolving into the leaf-wrapped sachets served today. 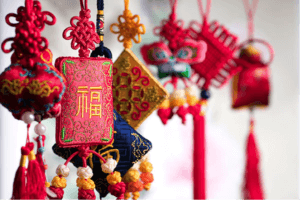 Commemorating loyalty and respect for parents and elders, the Dragon Boat Festival is also known as Zhongxiao Festival, and is celebrated by Chinese families and communities all over the world. Zongzi dumplings have evolved over time with different villages and cities adapting the recipe with local ingredients and styles. In Southern China the dumplings’ triangular shape is preserved, for example, while Northern Chinese varieties have a longer rectangular shape. Zongzi are always made with sticky rice and can be either sweet with red bean and jujube fillings, or savoury with ingredients like mushrooms, green beans, salted egg yolk and pork belly.

This year as you’re cheering on your favourite team and making the most of public holiday, spare a thought for patritriotic poet Qu Yuan and his haunting spirit, without whose courageous suicide, there would be no dragon boats, no bonus day off work and no deliciously sticky rice dumplings.

Where to get your zongzi

In Hong Kong, most dim sum restaurants will serve zongzi during festival season, and some local congee shops also specialise in the delicacy all year round. To enjoy them at home, try the old shops in wet markets, or better yet, get friendly with your friends’ Chinese grandmas for an invite to try some homemade ones!

Triangular zongzi are popular in the south