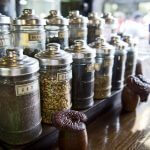 While the change in weather provides a welcome respite from the heat and humidity, it often means the start of sniffle season, especially when you’re new in town. Traditional snake soup might be the city’s most famous way of keeping warm in winter, but if snake isn’t your cup of tea, there are some gentler entries into the world of Chinese remedies. Here are a few of our picks for colds and sore throats, but of course, for a nasty flu you should see a doctor or a Traditional Chinese Medicine practitioner.

If you grew up in Hong Kong, chances are you had to drink some gnarly tasting teas when you were ill. At the other end of the medicinal spectrum is this hot coca-cola remedy. Thinly slice a thumb-sized piece of ginger into a pan with a can of coke, heat and simmer gently for a few minutes then pour into a mug with some lemon slices and drink while hot.

Universally adored, this syrup looks like tar but tastes like herbal marzipan and works a treat for sore throats and coughs. Eat straight from the spoon or add a glug to a mug of hot water for a soothing winter drink, which you can take to the next level by adding a few slices of ginger and a shot of whisky for a Hong Kong twist on a hot toddy. NJPPK is readily available in most 7-Elevens and supermarkets around the city.

Good for digestion as well as sore throats, dried red dates are an easy cupboard staple. When you feel a scratchy cough coming on, rinse three or four dates, drop them into a mug, then pour about half a cup of boiling water over the dates and let them steep. In a separate cup dissolve a teaspoon of manuka honey into another half cup of warm water, rather than hot, to preserve the properties of the honey. Stir the honey water into your mug with the dates and enjoy.