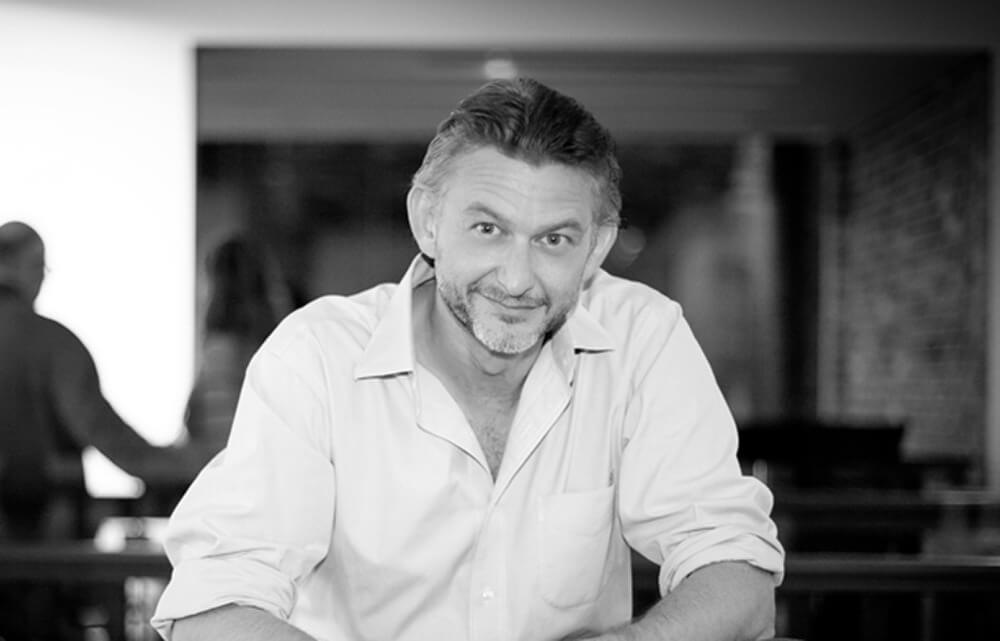 Sean Dix, of Dix Design + Architecture, is the designer behind many of Hong Kong’s most memorable restaurant interiors. A graduate from the School of the Art Institute of Chicago, Rietveld Academie in Amsterdam and Domus Academy in Milan, Dix has extensive experience leading international teams of clients, designers, project architects, structural engineers, contractors, fabricators and local architects in order to bring complex projects to fruition.

What drew you to a career in design?

I have two clichéd answers, both completely true.

The first is Lego. I was a complete Lego nerd and this sparked my interest in architecture. I now have two sons and they are both Lego nerds. One even told me he wants to learn Danish so he can go work for them one day.

Second, and more precisely, I moved away from home when I was very young. I was living in San Diego at 17 with roommates and no money. When I got my own apartment, it was empty so I went to Salvation Army. This was back in the late 80s so the mid-century modern trend had not hit yet. San Diego had been a big boomtown so there was all this super cool furniture floating around the thrift stores. I built this whole mid-Century apartment with a great big vintage record player, collected old vinyl, wore vintage clothes and drank shaken martinis. But it never crossed my mind to make a living doing that until I was at a cocktail party and met a furniture designer. I then began studying fine wood-working at the community college and had a great teacher who helped me build my portfolio and get into design college.

How did you end up working in hospitality design?

I initially did a lot of luxury retail projects but kind of fell into restaurant work.

I actually put myself through school working in restaurants: first I was a dishwasher, then a busboy, a bartender, a waiter in a slew of places and finally a manager of a jazz club in Chicago. All those late-nights clearing tables and slinging cocktails became really useful to my career designing restaurants and bars because I understand how the flow should work.

What does design mean to you?

I don’t like design. I can’t stand design. The longer I am involved in this business, the more I find it irritating.

I find that the best work that I do, and that other designers do, is when they’ve stripped out as much of the design as possible. My best designs are where my ideas sit in the background.

People don’t really get what ‘design’ is anyway. Only small percentage of what I do is aesthetic. The rest is how to make the pieces fall together properly, how to make a place flow and how to make the guest the protagonist.

Of course, some stuff I do is wacky, but it’s strategically wacky. The Ho Lee Fook entrance with more than a hundred gold cats waving at guests is this kind of comical, ridiculous, frenetic, silly thing. But we put it there for a reason and it works. It’s one of the great Instagram moments of Hong Kong.

How do you approach the design process?

One of the more unusual ways that I work, is that I try not to draw anything for a really long time. I first spend a lot of time breaking down what the client wants to communicate with their space. For example, if they want to recreate a 1950s Italian red sauce joint, then that’s what we start researching, work out how to create that kind of vibe or environment in what is usually just an empty box.

I spend a lot of time thinking, writing, making lists. I stall drawing because you fall in love with your little drawings and get stuck on your clever ideas which might not be appropriate in the end. There’s a famous expression in writing, ‘murder your darlings,’ and I try to do that as much as possible.

You don’t like to start with drawing, but when in the process do you begin sketching?

With spaces, once we’re past conceptualising, we spend a lot of time planning the space, figuring out how to maximize it and get the flow right. I find that working through all of that technical stuff helps me start to understand what the aesthetics need to be.

I definitely sculpt by subtraction, rather than addition, and the more ‘mistakes’ we make, the faster we move forward. And boy, do we throw away a ton of work. It is probably the hardest thing for younger designers to understand how much of what you create isn’t used. That’s just the process. When you have the courage to work on things for two weeks then throw them in the trash, then you’re on the right track.

This reminds me about this great interview with chef Massimo Bottura, whom I admire a lot. He was talking about being from Modena, Italy, which is this kind of odd little city known for Ferrari and Aceto Balsamico, and how he thinks slow and moves fast. I thought wow, that’s completely my motto. Especially working in Hong Kong, working fast is imperative and the trick is how to convince your clients to let you think slow: lay the groundwork, get the pieces in place and then sprint.

How has social media changed how you approach design?

It’s a complete nightmare. You often end up with clients armed with stacks of Instagram inspiration requesting similar designs. And the funny thing is, you see the same images over and over again from different clients. Those images are so ubiquitous and everyone seems to think they’re the only one who saw it.

I try not to look at that stuff because it becomes limiting and distracting. You see things that are super cool and wish you had thought of it and get caught up in how you can tweak it to make it your own. It stultifies the design process.

Where do you look to for inspiration?

There are two key areas that I spend a lot of time looking at. One is art and the other is the history of architecture and design. A big inspiration are the old boring guys like Ludwig Mies van der Rohe and Pier Luigi Nervi and some of the new people, too.

I’ve got a great archive of books that I have been collecting since I was a student, and I use them often. Partly for inspiration, partly to understand what has been done before so I can do things that are a little different.

How do you find working in Hong Kong?

Like a lot of designers, I have a short attention span and the rhythm of work and life here is perfect for me. We get in, think slow, sprint through the project and then it’s done so we can think about the next one. We usually have a few projects at various stages of work which is great so I can focus on things while giving my subconscious time to think about something on the back-burner. It’s a good way to work.

I was in Italy for 15 years, and it is so slow I wanted to die. It can take years to get a single chair into production and drags on and on. When I was ready to leave Milan, Hong Kong was a great compromise. I already had some great fashion clients here for whom I was designing boutiques, it is also only two hours away from the company that makes all my furniture and I grew up in this part of the world because my dad was in the Peace Corps.

In terms of restaurant design in Hong Kong, because the rents are so expensive and the leases are so short, there is a propensity to cut corners where ‘it’s good enough’ is kind of the general approach to things. There are some obvious exceptions with some really serious restaurant groups, but there are so many where you see cheap plastic flooring that looks like wood. There is an assumption that people don’t notice. I’d like to think that assumption is wrong.

On the other side, you see restaurants where they’ve thrown million and millions at it to create this ultra-bling over-the-top result where the design is layered and the space is completely wacky, which I honestly believe doesn’t work. These are the kind of places that people go to once and are more for tourists.

We’re trying to create a place that people want to return to, and I’ve been really lucky that almost everyone I work with in Hong Kong makes me look really good because the food is great and the service is stellar.

People say it must be great to design restaurants in Hong Kong because they always fail so there is always more work. The ones I do are with people who know what they are doing so none of them have closed.