Whether filled with veggies, seafood or meat, dumplings are a cornerstone of Chinese cuisine and a comfort food to many for their delicious simplicity.

If you have never made them before, learning to properly wrap dumplings can seem intimidating, but it’s time to roll up your sleeves and prepare to get your hands dirty, as we show you how to make your own flavoursome little parcels.

At Ho Lee Fook it takes one of the chefs two or three hours to make 300 dumplings fresh every day, and once they’re gone, they’re gone. Chef Kelvin knows how to fold Chinese dumplings the proper way and also shares his secrets on how to cook them to springy perfection.

Before you start worrying which folding technique to use, you’ll have to get your hands on some dumpling wrappers. Our advice for home cooks is to get them from your local supermarket because it’s time-consuming to make dumpling wrappers from scratch and it is also incredibly difficult to roll them out paper-thin.

Set up your wrapping station with a bowl of water and a brush, the dumpling wrappers and a flowered tray for the finished dumplings. Now you can move on to the most important part: the filling – below is a list of the ingredients you need to make pork and cabbage dumplings:

10g salt for the filling, plus 2 teaspoons for the cabbage

Step 1: Add 2 teaspoons of salt to the cabbage in a bowl and leave it to sit for around 10 minutes to allow the salt to draw the liquid out of the cabbage. If you don’t do this the liquid will escape during cooking, leaving you with watery dumplings.

Step 2: Next, in a large mixing bowl, combine the pork mince, egg, coriander and spring onion. Season with the salt, white pepper, sesame oil and oyster sauce and mix until fully incorporated.  Set the mixture aside to marinate for 10minutes.

Step 3: Back to the cabbage. Squeeze out as much liquid as possible. Trust us, this is important.

Step 4: Roughly dice the cabbage then stir it into the mixture.  The mix should be sticky to the touch. If it is too loose, add some cornflour until it’s the right consistency Here’s the fun part: the wrapping.

Step 1: Place a wrapper on your palm and spoon a heaped teaspoon of filling onto the centre of the wrapper. Fold one half over the other to form a half-circle and lightly brush the edges of the wrapper with water to help it stick together. Be sure to glue the edges together tight so the dumplings don’t burst during cooking. 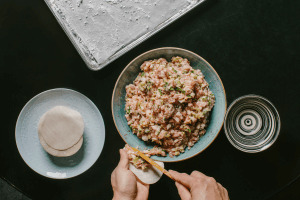 Step 2: Use your thumb and index finger to make a pleat towards the centre. Make 5-6 pleats down the right side of the dumpling. Make sure you give each pleat a gentle pinch at the seam to ensure a good seal. Repeat the same process on the left side of the dumpling. Store your finished dumplings on the floured tray. 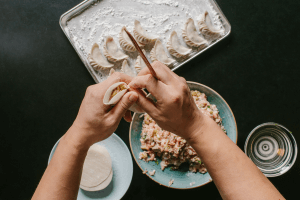 Step 3: Fill, fold, pleat, repeat. This is a good activity to get the whole family involved in. As so many fortune cookies tell us: many hands make light work.

For the dipping sauce, you will need:

Combine all ingredients together and mix until the sugar is dissolved.

How to cook your fresh dumplings, Ho Lee Fook-style

If the water is too hot the skin cooks faster than the filling leaving the skin overcooked once the filling is done. This technique produces a springy filling and perfectly cooked skin every time.

We hope you use your new dumpling-making powers for good and if you’re looking for more Asian inspiration, have a look at our guide to the 12 most iconic dim sum dishes or find out everything you need to know about soy sauce.